What El Nino Could Mean for Aspen Snowfall this Winter

What is El Nino? In the past it has meant record breaking snowfall for all of us lucky to be in Aspen when it happens. What El Nino could mean for Aspen snowfall this winter.

The world’s average temperature is breaking records, and India’s monsoon is in shambles. Borderline El Niño conditions are already here. How much worse will it get?

New data released Thursday by the International Research Institute for Climate and Society—a climate forecasting partnership between Columbia University and NOAA—shows that while ocean temperatures in the tropical Pacific are still above normal, the atmospheric response has so far been sluggish. After an impressive ramp up earlier this year, that means the coming El Niño is increasingly likely to fall a bit flat.

It’s a bit unusual for a building El Niño to dawdle as this one has. On Thursday, forecasters at the IRI scaled back forecasts a bit:

We have a ‘holding pattern’ on #ElNiño development, say Barnston. Probability a bit lower now than what we projected it to be last month. 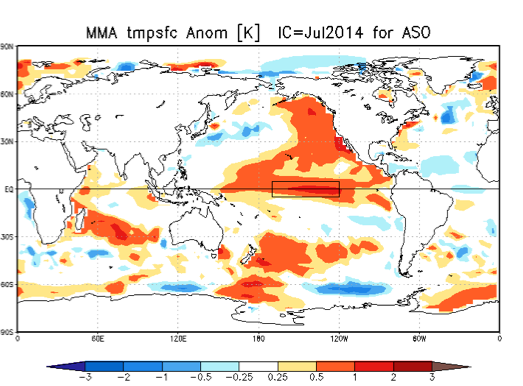 What’s going on is relatively straightforward: El Niño is a phenomenon that occurs simultaneously in the ocean and atmosphere, usually initiated by a subsea sloshing of warm water toward the typically cooler Eastern Pacific. That part has already happened. Since the Pacific is so huge, the gradual emergence of a big swath of warmer-than-normal water during an El Niño eventually prompts something else: a reversal in the local trade winds, which can shift weather patterns worldwide. That’s the part we’re still waiting on. This process needs a reinforcing shot of westerly winds (counter the trade winds’ typical direction) to help dampen the cold water that normally springs up from deep below the ocean’s surface in the East Pacific. So far, the westerly winds have not come, and cold water is beginning to eat away at the burgeoning El Niño.

The Australian Bureau of Meteorology—which like the United States hasn’t yet declared official El Niño conditions—was even more blunt in its update (PDF) earlier this week: “If an El Niño were to occur, it is increasingly unlikely to be a strong event.”

Just because a moderate-to-strong El Niño event is now less likely than a few months ago doesn’t necessarily change its expected impacts, however. Among the clearest climate signal for the second half of the year? An especially confident outlook for drought in Indonesia: 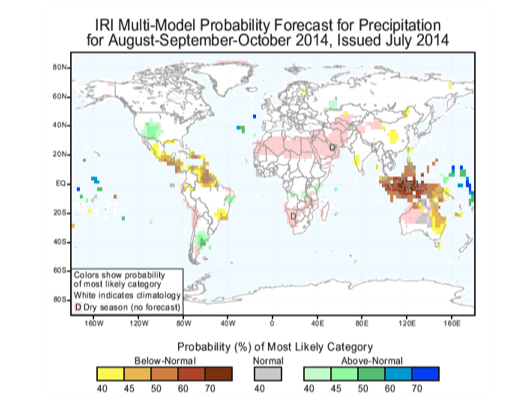 Though rainfall across Southeast Asia has been roughly average in recent months, there’s evidence that El Niño will tip the scale toward drought. If a big drought does occur, it could have profound and lingering consequences worldwide. Large-scale Indonesian forest fires linked to the huge 1997-1998 El Niño released the equivalent of about one-quarter of the world’s human-caused carbon emissions that year. A recent study found Indonesia has now surpassed Brazil as the epicenter of global deforestation, thanks in part to the explosion of palm oil plantations there.

Another interesting development in India is that the Indian Ocean Dipole—a periodic oscillation of ocean temperatures that influences the important monsoon circulation—is moving in the opposite direction of a typical El Niño years, increasing the odds of a poor rainy season there. On Thursday, the Indian Meteorology Department announced (PDF) that monsoon rains had finally reached the entire country, though cumulative rainfall is still running a whopping 37 percent below normal.

Meanwhile, in California, new data on Thursday showed the state’s epic drought has continued to worsen. More than 80 percent of California is now classified as under “extreme” or “exceptional” drought. The prospect of a weaker El Niño bodes poorlyfor heavy drought-busting rains along the West Coast this winter.

This article is compliments of http://www.slate.com/blogs/future_tense/2014/07/17/el_ni_o_2014_forecast_it_s_now_looking_weaker_but_that_s_not_all_good_news.html

Hopefully the El Nino picks up traction and we receive record breaking snowfall that this weather phenomenon brings!