Aspen, Colo. — The trend in boutique museum building reached a chilly, sun-gilded peak a few years ago and has leveled out, at least in the United States. These days we mostly get unsexy makeovers and add-ons, and the critical conversation has moved on. Still, celebrity commissions appear. A Renzo Piano-designed satellite for the Whitney Museum of American Art is underway in Lower Manhattan. And last month, a new home for the Aspen Art Museum designed by the Japanese architect Shigeru Ban,winner of the 2014 Pritzker Prize, made its debut here.

The building, which opened to a mixed local reception, has its virtues and they are not small; it also embodies some of the absurdities and contradictions that have given “starchitecture” a bad name. Yet the Aspen museum itself as an institution — which is modest in size, collects no art and has free admission — offers, at least potentially, a working model for what a new kind of 21st-century museum, regional or otherwise, could be.

The particular regional setting in this case is a promising one. Aspen, set high in the Rockies, is physically gorgeous. Socioeconomically, it’s a very strange place. Founded as a gold-and-silver mining camp in the 19th century, it is now a migratory perch for a significant percentage of the nation’s financial elite. Dozens of Forbes 400 billionaires own property here. Land-grabbing mansions dot the hillsides. Private jets jam the tiny Aspen airport like a fleet of waiting cabs. 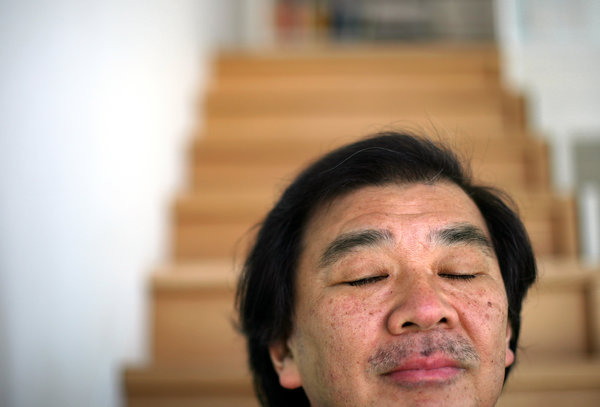 Given that some of those billionaires — Gustavo Cisneros, Leonard Lauder, etc. — are major art collectors, it makes sense that the town, despite its remoteness and primary identity as a ski resort, should have an art museum, though the one that exists today is quite different from what it once was. The original Aspen Art Museum opened in 1979 in a one-gallery space in a repurposed hydroelectric station. For years most of the exhibitions were of local artists, including student shows. Grassroots was the word for it.

With the arrival of Heidi Zuckerman Jacobson as director and chief curator in 2005 — she came from the Berkeley Art Museum — that identity changed. She organized shows by buzzy young East and West Coast figures, with some international artists folded in. A New Yorker would have known every one. After assembling a supportive board, she proposed moving and expanding the museum. In 2007, it commissioned Mr. Ban.

He was a gutsy choice. At that point, like some of Ms. Zuckerman Jacobson’s artists, he was still only a semi-bankable name. He had never built a permanent museum. His reputation rested mainly on his imaginative designs for temporary, disaster-relief housing using cheap, recyclable materials: hollow cardboard tubes, treated paper, canvas tarps, plastic sheeting. He had applied this technology to shelters for victims of natural and man-made catastrophes in Africa, India and Japan. Wherever emergency struck, he seemed ready to go.

His do-gooder bona fides were what sold him to the board members, and they make him a piquant choice for a town in which possession, not dispossession, rules and environmentalism have powerful foes. (The Koch brothers, Charles, David and William, notable opponents to climate control legislation, own significant property here.)

The building he has delivered is a curious one, ugly-beautiful: A three-story glass cube enclosed in thick latticework of waterproofed paper. Where some viewers will see the inspiration of Japanese basketry, others will see a grim, squat cage. The building is shoehorned into a tight corner lot at a downtown intersection, emphasizing both the structure’s 33,000-square-foot bulk and its cultural estrangement from the Victorian-style buildings around it. 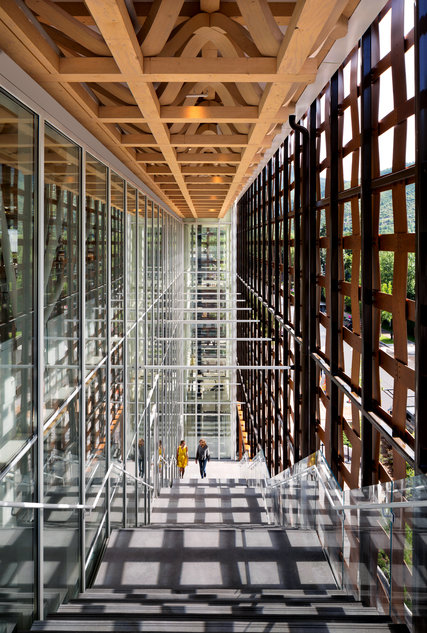 A view of the stairs between the woven exterior and the interior glass cube at the Aspen Art Museum.CreditMichael Moran/OTTO

The interior, by contrast, is conventional, with (counting the basement) three levels of plain white-box galleries topped with a, restaurant and terrace with a ski-slope view. Signature elements of Mr. Ban’s disaster designs — molded paper outside, cardboard tubing inside — have been incorporated throughout. And one of the building’s several inaugural shows, “Shigeru Ban: Humanitarian Architecture,” seeks to associate the museum with the architect’s many relief projects.

The exhibition is gripping, with photographs and full-scale examples of tent-like structures he’s made for hard-hit places around the world, from Rwanda to New Orleans (where the show travels this fall). But it has no substantive relationship to the $45 million building it’s in. In this case, paper and tubing are often merely decorative detail. No mention is made of the many nonrelief projects Mr. Ban has undertaken, including the recent design of extremely expensive homes for extremely rich clients, including the Cast Iron House condominiums in Manhattan.

It’s in the nature of art museums to want to paper over yawning gaps between social reality and aesthetic illusion — make them a single, acceptable, excusable thing. I’d go as far as to say that most museums take this as their main task. In this regard, the Aspen Art Museum, judging by its current shows, is typical, no better, no worse.

Another of those shows is, like the Ban exhibition, quite strong. Titled “David Hammons Yves Klein/Yves Klein David Hammons,” it brings together, in a compare-and-contrast way, a pair of familiar artists — the American Mr. Hammons and Klein (1928-62), a Frenchman — who turn out to share unexpected interests: in experimenting with natural materials (rain, fire and sponges in Klein’s case; coal, grease and hair in Mr. Hammons’s), in the economics of immateriality (Klein traded empty space for gold; Mr. Hammons hawked snowballs on the street), and in the use of direct prints of the human body as sensual and political images.

None of this is explained in words, though I wish some of it were. Ms. Zuckerman Jacobson has referred to the museum as a sacred space and refrains from sullying it, or art, with interpretive texts. Even without them, conversations between the works are evident, though it’s easy to imagine some visitors seeing just woozy abstraction with images added. Information, take it or leave it, is good.

The new building’s other exhibitions are conscientiously global, but without surprises. A handful of ceramic pieces by the German artist Rosemarie Trockel tells us little we didn’t know about her. A two-room display of precious-looking abstract drawings by another German, Tomma Abts,is a room too many. An installation by the Chinese artist Cai Guo-Qiang, incorporating live tortoises with iPads fixed to their shells, ran into trouble. Animal-rights groups raised a hullabaloo, and the tortoises were retired ahead of schedule.

Two good shows out of five is better than average, but is “good” enough? The museum clearly wants to position itself within a national and international orbit and beyond regional status. Its way of doing this at present is by importing market-vetted talent from the coastal art centers where Aspen’s flyover collecting class presumably shops.

My question is, why settle for being a New York-Los Angeles outpost? Why not take advantage of the excitements that regional consciousness can offer, and by doing so chip away at the tired East Coast-West Coast hegemony?

The Aspen Art Museum’s founders were wise to create a noncollecting, community-serving museum on the classic European kunsthalle model, a model that assures that even residents of small cities have access to art and some say about the choice of it. Unencumbered by the financial pressures of buying art, the technical demands of caring for it and the urge to expand to store it, the kunsthalle can, ideally, stay light on its feet. When a show ends, everything goes back to where it came from, leaving a clean deck that can be refilled in inventive ways.

At least two major New York institutions had a brush with something like this model in their histories. The New Museum, founded in 1977 as the New Museum of Contemporary Art, decided it would keep no art in its collection for more than 20 years. The Museum of Modern Art, beginning in 1947, sold the Metropolitan Museum certain older works from its holdings to make room for new ones. Both the New Museum and MoMA soon abandoned such policies, but the instinct behind it was refreshing: Don’t get bogged down, pass things along, bring in the constantly changing new.

There has never been more new art in America than there is today. Thousands of art schools and galleries across the country are producing students, to say nothing of artists who work on their own. Only a small fraction of them can, or feel impelled to, relocate to New York, Chicago or Los Angeles. Many smaller cities have vital art scenes of their own, yet no dedicated venues for showcasing it.

A kunsthalle like the Aspen Art Museum, an institution somewhere between a museum and alternative space, should make room for artists closer to home, and in so doing help break up the longstanding art-center stranglehold.

Not all such institutions need the $74.6 million that Ms. Zuckerman Jacobson has raised for her museum. (After the building is paid for there’s still a $29.6 million endowment left.) Indeed, an argument could be made that less-to-lose modest can be better for art, encouraging chance-taking. Still, whether there are megabucks or not, what’s needed first is the will to believe, the will to treat local — what’s here — as big league instead of perpetuating the myth that innovative, important and valuable can emerge only from somewhere else.

To learn more about commercial real estate in Aspen and discuss the new Art Museum Call Ruth Kruger today at 970.404.4000

or visit us at